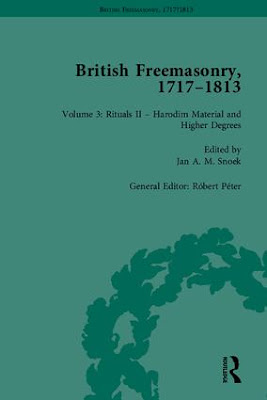 
Freemasonry was a major cultural and social phenomenon and a key element of the Enlightenment. It was to have an international influence across the globe. This primary resource collection charts a key period in the development of organized Freemasonry culminating in the formation of a single United Grand Lodge of England.

The secrecy that has surrounded Freemasonry has made it difficult to access information and documents about the organization and its adherents in the past. This collection is the result of extensive archival research and transcription and highlights the most significant themes associated with Freemasonry.

The documents are drawn from masonic collections, private archives and libraries worldwide. The majority of these texts have never before been republished. Documents include rituals (some written in code), funeral services, sermons, songs, certificates, an engraved list of lodges, letters, pamphlets, theatrical prologues and epilogues, and articles from newspapers and periodicals.

This collection will enable researchers to identify many key masons for the first time. It will be of interest to students of Freemasonry, the Enlightenment and researchers in eighteenth-century studies.


- Many texts are published here by special arrangement with the Library and Museum of Freemasonry, London


- A consolidated index appears in the final volume


[Anon.], The Beginning and First Foundation of the Most Worthy Craft of Masonry with the Charges Thereunto Belonging (1739)

Thomas Edmondes, An Address … as Delivered at the Steward’s Lodge (1763)


Thomas Dunckerley, A Charge, Delivered to the Members of the Lodge of Free and Accepted Masons, Held at the Castle-Inn, Marlborough (1769)


William Meeson, An Introduction to Free Masonry: For the Use of the Fraternity; and None Else. In Four Parts (1775)

William Dodd, An Oration Delivered at the Dedication of Free-Masons’ Hall, Great Queen-Street, Lincoln’s-Inn-Fields, on Thursday, May 23, 1776 (1776)

Anon. [William Preston], State of Facts: Being a Narrative of Some Late Proceedings in the Society of Free Masons, Respecting William Preston (1778)

[Anon.], An Account of the Institution and Proceeding, of the Governors of the Royal Cumberland Free-Mason School (1788)

[Parliament of Great Britain], An Act for the More Effectual Suppression of Societies Established for Seditious and Treasonable Purposes,and for Better Preventing Treasonable and Seditious Practices (1799)

[Anon.], The Masonic Museum, Containing a Select Collection of the Most Celebrated Songs, Sung in All the Respectable Lodges (1799)

[Antients and Moderns Grand Lodges], Articles of Union between the Two Grand Lodges of Freemasons of England (1813)


Womens Masonry or Masonry by Adoption (1765)


Excerpts from the Texts by Ferdinand Fritz Schnitger


Anon. [signed Philo Lapidarius], An Answer to the Pope’s Bull, with the Character of a Freemason (1738)


Bernard Clarke, An Answer to the Pope’s Bull, with a Vindication of the Real Principles of Free-Masonry (1751)


William Imbrie and William Geddes, The Poor Man’s Complaint against the Whole Unwarrantable Procedure of the Associate Session in Glasgow, Anent him and Others in Seeking a Confession of the Mason and Chapman Oaths (1754)


James Steven, Blind Zeal Detected: or, A True Representation of the Conduct of the Meeting I was a Member of, and of the Kirk-Session of the Associate Congregation, at Glasgow (1755)


[Associate Synod], ‘An Act of the Associate Synod Concerning the Mason-Oath’ and A, R, ‘An Impartial Examination of the Act against Freemasons’ (1757) in the Appendix of The Free Masons Pocket Companion (1761)


[Anon.], A Defence of Free-Masonry, as Practiced in the Regular Lodges, both Foreign and Domestic under the Constitution of the English Grand Master (1765)


[Anon.], Masonry Vindicated: a Sermon. Wherein is Clearly and Demonstratively Proved, that a Sermon, Lately Published, ‘Intitled Masonry the Way to Hell’, is an Intire Piece of the Utmost Weakness, and Absurdity (1768)


George Smith, ‘Ancient and Modern Reasons Why the Ladies Have Never Been Admitted into the Society of Freemasons’, in The Use and Abuse of Free-Masonry (1783)


[A Friend to Truth], A Defence of Free Masons etc., in Answer to Professor John Robison’s Proofs of a Conspiracy (1797)


[Anon.], The Indictment and Trial of John Andrew, Shoemaker in Maybole, Sometime Teacher of a Private School There, and Robert Ramsay, Cart Wright There, Both Members of a Masonic Lodge at Maybole: Charged with the Crime of Sedition, and Administering Unlawful Oaths (1800)


[Anon.], Petition and Complaint at Brother Gibson’s Instance Against Brother Mitchell, and His Answers Thereto; With the Procedure of the Grand Lodge Thereon and Proof Adduced (1808)


[Anon.], An Exposition of the Causes which Have Produced the Late Dissensions Among the Free Masons of Scotland (1808)


[Anon.] An Enquiry into the Late Disputes among the Free-Masons of Ireland; Wherein is Detailed a Free and Important Account of the Different Transactions which Gave Rise to, and Continued the Controversy, from the Commencement to the Establishment of the Grand Lodge of Ulster (181


British Fraternal Societies and the Response to Grand Lodge Freemasonry