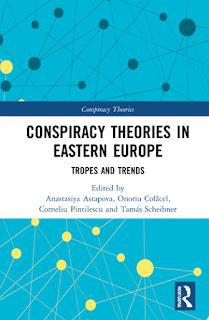 This collection of state-of-the-art essays explores conspiracy cultures in post-socialist Eastern Europe, ranging from the nineteenth century to contemporary manifestations.

Conspiracy theories about Freemasons, Communists and Jews, about the Chernobyl disaster, and about George Soros and the globalist elite have been particularly influential in Eastern Europe, but they have also been among the most prominent worldwide. This volume explores such conspiracy theories in the context of local Eastern European histories and discourses. The chapters identify four major factors that have influenced cultures of conspiracy in Eastern Europe: nationalism (including ethnocentrism and antisemitism), the socialist past, the transition period, and globalization. The research focuses on the impact of imperial legacies, nation-building, and the Cold War in the creation of conspiracy theories in Eastern Europe; the effects of the fall of the Iron Curtain and conspiracism in a new democratic setting; and manifestations of viral conspiracy theories in contemporary Eastern Europe and their worldwide circulation with the global rise of populism. Bringing together a diverse landscape of Eastern European conspiracism that is a result of repeated exchange with the "West," the book includes case studies that examine the history, legacy, and impact of conspiracy cultures of Bulgaria, Estonia, Hungary, Moldova, Poland, Romania, Russia, Slovakia, Ukraine, the former Yugoslav countries, and the former Soviet Union.

The book will appeal to scholars and students of conspiracy theories, as well as those in the areas of political science, area studies, media studies, cultural studies, psychology, philosophy, and history, among others. Politicians, educators, and journalists will find this book a useful resource in countering disinformation in and about the region.

Introduction: Eastern Europe in the Global Traffic of Conspiracy Theories

Part I. Conspiracy Culture under Socialism and its Afterlife in Eastern Europe

1. Chernobyl Conspiracy Theories: From American Sabotage to the Biggest Hoax of the Century

3. "By the Order of their Foreign Masters": Soviet Dissidents, Anti-Western Conspiracy, and the Deprivation of Agency

Part II. "The Enemy Within": Jews and Freemasons

4. The Myth of a Judeo-Bolshevik Conspiracy in Hungary, Within and Beyond the Far Right

5. An Open Secret: Freemasonry and Justice in Post-Socialist Bulgaria

6. From Judeo-Polonia to Act 447: How and Why Did the Jewish Conspiracy Myth Become a Central Issue in Polish Political Discourse?

7. Dissolution of Yugoslavia as a Conspiracy and its Haunting Returns: Narratives of Internal and External Othering

8. The Dangerous Russian Other in Ukrainian Conspiratorial Discourse: Media Representations of the Odessa Tragedy

9. The Victims, the Guilty, and "Us": Notions of Victimhood in Slovakian Conspiracy Theories

10. Soros Conspiracy Theories and the Rise of Populism in Post-Socialist Hungary and Romania

Anastasiya Astapova is a research fellow at the Department of Estonian and Comparative Folklore at the University of Tartu, Estonia.

Corneliu Pintilescu is a researcher at the George Baritiu History Institute (in Cluj-Napoca) of the Romanian Academy.

Tamás Scheibner is assistant professor in literary and cultural studies at the University of Budapest (ELTE), Hungary, and senior research fellow in contemporary history at the Research Centre for the Humanities, Hungarian Academy of Sciences Institute of Excellence.