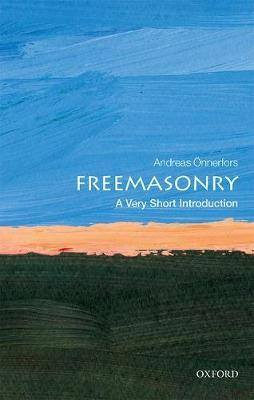 Reviewed by: Diane Clements, Director, The Library and Museum of Freemasonry, London, UK.

increased through academic and masonic collaboration assisted by the great

availability of traditional sources via electronic catalogues and of new digital

resources. One of the barriers to new researchers has been a dearth of reliable basic

information about freemasonry. Recent publications by Brill and Routledge have

helped to fill the void but their volumes are priced for the academic library market,

series is set at a much more accessible price – and it is pocket sized as well.

images of freemasonry’, Pierre Bezukhov’s idealistic encounter with freemasonry in

Reports in the late 1990s. This geographically and chronologically wide ranging

approach is followed throughout the book. This can often be thought provoking but

this subject and more knowledgeable readers might question whether the examples

chosen are the most appropriate.

Following informative chapters on the development of freemasonry and the

its time. He addresses the dichotomy between freemasonry as a training ground

for liberal, proto-democratic ideas and its proclivity for secrecy from a sociological

perspective. His next chapter considering ritual on both a historical and theoretical

material on the participation of women in freemasonry, an approach that certainly

and the relative lack of other accessible published material on the subject. Önnerfors’

chapter focuses on the 18th century and particularly on female adoption ritual.

female freemasonry, following the establishment of the International Order of

Freemasonry Le Droit Humain, in 1893, is limited to less than a page. It consequently

ignores the links between women freemasons, suffrage and women’s rights, and

any developments outside of Western Europe, particularly North America. It also

representing merely a change of name.

Another topic of continuing interest is freemasonry’s relationship with religious

and secular authorities which Önnerfors discusses in a chapter titled Perceptions,

Prejudices and Persecutions. The author’s explanations and often very pertinent

examples are somewhat undermined by the rather muddled structuring of this

chapter which seems to go backwards and forwards between the issues, their

historical development and suggested explanations. As this chapter also includes

the author’s concluding remarks, it is disappointing that he was not able to return to

idealized version amidst a brief discussion of freemasonry and 21st century religions.

Without wishing to undermine the author’s achievement, there are a couple of

specific comments which might be made. A short publication – which can be read

in one sitting – inevitably highlights inconsistencies. Of particular note are the

to it as the ‘Secret Societies Act’ as on page 4. More significantly it did not ‘control

the activities of masonic lodges in Britain’ (p. 4) nor place them ‘under government

control’ (p. 114) or regulate them in any way. The Act required masonic lodges

authority. There is no evidence that the authorities, national or local, ever used this

information in any systematic way.

The author is, however, to be heartedly congratulated on working within the