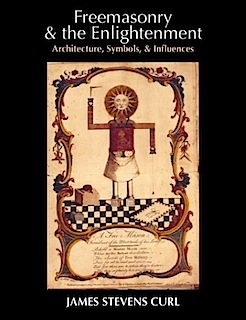 This wide-ranging, thorough and superbly illustrated study of Freemasonry's influence on Western culture, especially in the eighteenth and early nineteenth centuries, follows Professor Curl's previous book, The Art and Architecture of Freemasonry (1991), which was hailed at the time not only as "an immensely useful, and sane, introduction to a field often fraught with speculative sensationalism", but as "a mine of information", and one of the most "original and important" contributions towards a greater understanding of the Enlightenment published in recent times. It won the coveted Sir Banister Fletcher Award as Best Book of the Year in 1992. Now, building on his earlier work, Curl has hugely expanded his investigations, showing how aspects of Masonic ideas have permeated the design of buildings, parks, gardens, and cemeteries, as well as much else. His Glossary outlines some of the complex ideas and iconography of the Craft (notably the symbolic and moral significance of the Architect's and Mason's instruments and tools), and the extensive Bibliography contains an enormous amount of material to stimulate further research, not least into the curious phenomenon of antipathy towards Freemasonry by authoritarian closed minds and totalitarian bigots. The illustrations are exceptional, and are accompanied by detailed captions (themselves as illustrated history of elements found in Freemasonry). It is a curious fact that many historians have avoided Freemasonry through prejudice and timidity, but in this work Professor Curl has grasped the nettle, and shows there is a hugh wealth of material available (much unaccountably hidden from view or deliberately ignored for reasons that defy analysis), some of which will whet the most jaded of appetites.


In the small but very active international network of historians of Freemasonry, James Stevens Curl is an eminence grise. His beautiful publications on history and architecture are manifold, and Freemasonry has a distinct place in his oeuvre.
Freemasonry & the Enlightenment: Architecture, Symbols, & Influences is an enriched and expanded development of an earlier work by the author, this book being prefaced by that other eminent British historian of Freemasonry, Andrew Prescott. After an elaborate and exceedingly up-to- date introduction to the complex history of the genesis and first steps of the organisation, Curl considers Masonic influence in iconography, architecture, garden design, tombs and music. His thesis is that the influence of the order has been grossly underestimated and that Masonic lore holds a considerable place in the buildings and imagery of the 18th and 19th centuries, both in Britain and on the Continent (with its profoundly different Freemasonry).
Obviously, lodge buildings themselves are treated extensively - for example, the gradual development of the colossus of Great Queen Street in London - but Curl also considers the Masonic element of constructions that have no formal use by the Craft. A passionate lover of classical buildings, Curl holds post-1945 architecture in low esteem. Whether dismissing it tongue in cheek or with overt contempt, the author rejects its lack of references, meaning and symbolism. He yearns for older models where meaningfulness was at the centre of a humane art of building, Masonic meaning being an important part of that. I am not quite sure that all of today's architect-Freemasons would readily agree with the whole of the author's argument.
But whatever one thinks of his aesthetical (and even ethical) appreciations, Curl makes an important point when he stresses the richness of allusion and symbolism in the classical architecture he cherishes.