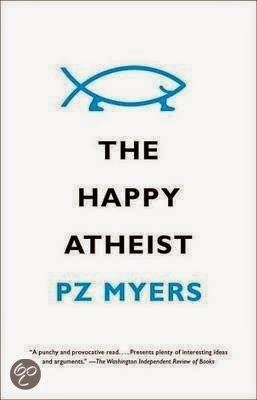 A Review of The Happy Atheist by PZ Myers
August 13, 2013 By Hemant Mehta 40 Comments
This is a guest post by Chantelle Moghadam.

[Hemant's Note: For the sake of disclosure, I wrote a blurb for the back of the book. This review, however, was written independently]

PZ Myers writes the first half of The Happy Atheist (Pantheon, 2013) with all the bound-up angst against religion that most atheists hold and, as an atheist myself, I completely understand where that frustration comes from. I can’t help but wonder, though, what a religious person might think of atheists if they read this book. The most convincing arguments against religion are not always the ones telling religious people how ridiculous they are, but ones that make valid criticisms of religion itself. Even someone who is on the fence about religion may be offended within the first few pages and unable to finish the rest of it. The Kirkus Review held nothing back when it said of the book: “Unlikely to change a single mind or cause even the slightest shift in perspective.”
Among the atheist community, Myers is known for his use of inflammatory language and, for his fans, it’s certainly part of his appeal. To that end, it’s worth noting that The Happy Atheist is a collection of both original essays and reworked blog posts — Glenn Branch of the National Center for Science Education wrote in Nature that, by his count, “Pharyngula posts provide the basis for at least 26 of the 38 essays and 5 more are adapted from a talk he gave in 2010.” Myers may have been better served saving his condescending tone for his blog. There seems to be an underlying message in his writing that religious people are stupid. As an atheist, my quarrel is with religion, not necessarily with those who follow it, and I got the sense that that’s not Myers’ point of view.
He writes: “Living in America in the twenty-first century is like attending the circus when the clowns are performing — it’s low comedy, full of pratfalls and pies in the face and silly costumes.” It’s an accurate comparison, no doubt, and Myers even explains that he bears no obligation to play nice when it comes to criticizing religion.
Yet, while that’s true, he seems to take some empty shots that contribute more to the “arrogant atheist” stereotype. In a chapter titled “The Joke” (referring to religion itself), an irritated Myers writes about debating theists, “There’s usually no point in arguing further, because you’re dealing with the sort of mind that thinks Jesus is a subatomic particle that holds the universe together with the power of his love.” Sarcasm aside, I hardly think this is a fair representation of how religious people are or what they believe.
It is unfortunate to think that some readers might be put off by the tone of the book considering that Myers makes some great points towards the latter half that might be very convincing to those having doubts about their faith. He convincingly pushes religion off the pedestal society places it on.
He also makes us pause to consider the amount of time covered by the Bible when compared to the actual age of our world. Myers points out that human life is transitory and that it is simply self-absorbed to think that the Bible, which only spans a very small period of time and revolved entirely around the human race, is the only correct reference for the history of our world. He then paints an image of the world many years from now when the Bible is simply a piece of human history and an insight into our modern culture, much like the Parthenon is for us today. In this light, religion actually seems like something quite beautiful. It’s amazing, really, when you consider how it will soon be just another part of history.
For many atheists, The Happy Atheist will be seen as a series of concise arguments against religion, written in a distinctive writing style that is entertaining and comical. It’s always nice to know that others feel the same frustration we do and, in fact, Myers offers us a few arguments that can serve as “ammunition” against religion, so to speak.
Having been an atheist for a long time now, you might think I’ve heard all the arguments, yet Myers presented some new and valuable points of view that I hadn’t yet considered. One chapter, a play on an “About the Author” section, compares our own world to one in which people place utmost importance on the hats they wear. The hats rarely change and there are only a small percentage of people who wear no hats at all. It is an allegory for religion and puts what we see as a very important part of our culture into perspective.


All that said, I believe there is a difference between valid criticism and venting frustration. This book is heavy on the venting and its tone often comes off as disdainful and cocky. Maybe that shouldn’t matter, but the book’s subject matters supports the idea that it was written for religious believers. Yet it’s atheists who will probably end up getting the most out of it.
Gepost door Boekennieuws VM op 04:52