Common. On revolution in the 21st century 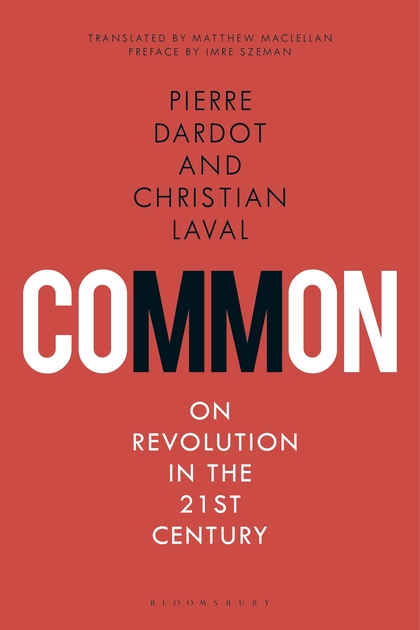 About Common
Around the globe, contemporary protest movements are contesting the oligarchic appropriation of natural resources, public services, and shared networks of knowledge and communication. These struggles raise the same fundamental demand and rest on the same irreducible principle: the common.
In this exhaustive account, Pierre Dardot and Christian Laval show how the common has become the defining principle of alternative political movements in the 21st century. In societies deeply shaped by neoliberal rationality, the common is increasingly invoked as the operative concept of practical struggles creating new forms of democratic governance. In a feat of analytic clarity, Dardot and Laval dissect and synthesize a vast repository on the concept of the commons, from the fields of philosophy, political theory, economics, legal theory, history, theology, and sociology.
Instead of conceptualizing the common as an essence of man or as inherent in nature, the thread developed by Dardot and Laval traces the active lives of human beings: only a practical activity of commoning can decide what will be shared in common and what rules will govern the common's citizen-subjects. This re-articulation of the common calls for nothing less than the institutional transformation of society by society: it calls for a revolution.
Table of contents
Introduction:
The Common: A Political Principle
Chapter 1: Archaeology of the Common

PART 3: Nine Political Propositions
Postscript on the Revolution of the 21st Century
Index
Reviews
“The common has emerged as a key concept in 21st century struggles for justice. Dardot and Laval not only explain why, they also inspire us to build and strengthen commoning movements. An important intervention.” –  Jodi Dean, Professor of Political Science, Hobart and William Smith Colleges, USA and author of 'The Communist Horizon',
“In the past few years, movements across the planet have fought bravely for the re-appropriation of plundered and privatized goods, while revitalizing the critique of property, understood as the legal form structuring our political economy and everyday life. Common is a sweeping, erudite and combative attempt to draw the theoretical balance-sheet of these movements and critiques, to anatomize their spontaneous philosophies, and to transform 'common' into a political principle for a new model of revolutionary politics that could break through the impasses of contemporary radical thought and practice. An indispensable contribution to one of the central debates of our time.” –  Alberto Toscano, Co-director of Centre for Philosophy and Critical Thought, Goldsmiths, University of London, UK and author of 'Fanaticism',
“What do you do after you have written one of the most devastating criticisms of neoliberal reason? Dardot and Laval's answer is to turn to the exact opposite to neoliberalism's reduction of nature to private property and society to competition, to the common. The common is framed here not as something lost in precapitalist mists, or something that only appears sporadically in moments of revolt, but as that which must be instituted and created by practices. There are no shortages of criticisms of the existing order, but Common is the rare book that takes the next step, not just imagining a new world, but showing us the conditions for its creation.” –  Jason Read, Associate Professor of Philosophy, University of Southern Maine, USA, author of 'The Politics of Transindividuality',
“After their massive tome on Karl Marx, Pierre Dardot and Christian Laval strike again, this time with an even more wide-ranging militant investigation into the common. Combining long-term legal and conceptual history with classical and present-day political theory, they invite us to leave behind the habitual focus on either the tragic story of the enclosure of the commons or the heroic example of the Paris Commune and instead argue for an all-encompassing understanding of the common as the pivotal ground for a future politics. This is a must-read for each and everyone interested in the shared practice of instituting new forms of life in common.” –  Bruno Bosteels, author of 'The Actuality of Communism',
“This new and exciting translation of Dardot's and Laval's Common: On Revolution in the 21st Century is the best account of the communal idea available in contemporary theory and criticism. Philosophically rich and archeologically exhaustive, it stands as a founding text in the growing field of commons studies that will appeal to a wide variety of teachers, scholars, and activists who share a commitment to exploring a new reason of the common in everyday activities and practices.” –  Davide Panagia, Professor of Political Science, University of California Los Angeles, USA,
Gepost door Boekennieuws VM op 06:56