Spinoza The Ethics of an Outlaw 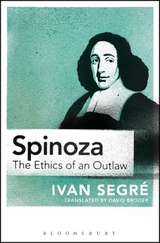 Spinoza The Ethics of an Outlaw


Spinoza is among the most controversial and asymmetrical thinkers in the tradition and history of modern European philosophy. Since the 17th century, his work has aroused some of the fiercest and most intense polemics in the discipline. From his expulsion from the synagogue and onwards, Spinoza has never ceased to embody the secular, heretical and self-loathing Jew. Ivan Segré, a philosopher and celebrated scholar of the Talmud, discloses the conservative underpinnings that have animated Spinoza's numerable critics and antagonists. Through a close reading of Leo Strauss and several contemporary Jewish thinkers, such as Jean-Claude Milner and Benny Levy (Sartre's last secretary), Spinoza: the Ethics of an Outlaw aptly delineates the common cause of Spinoza's contemporary censors: an explicit hatred of reason and its emancipatory potential. Spinoza's radical heresy lies in his rejection of any and all blind adherence to Biblical Law, and in his plea for the freedom and autonomy of thought. Segré reclaims Spinoza as a faithful interpreter of the revolutionary potential contained within the Old Testament. –


Part I: Election, Hatred, and The Philosopher: Spinoza and "Bourgeois" Theorists Introduction


6. The Tree of Knowledge


The Manifesto of the Spectrum


“Ivan Segré's Spinoza: The Ethics of an Outlaw is a major and long overdue contribution to our understanding of Spinoza's complex and overdetermined relation not merely to Judaism, but to the great texts of the Jewish tradition as Spinoza understood it. Segré possesses the ability to follow Spinoza through the labyrinth of Maimonides' Guide and contextualize the citations and criticisms whose orientation has escaped most readers. Of particular interest is his demonstration that Christianity from Spinoza's perspective is as concerned with the disposition of the flesh as the Judaism it claimed to supersede: if circumcision is nothing, then so is the crucifixion. Segré's Spinoza neither celebrates (a) religion nor does he demand its suppression in favor of of a secularism that rests on a disavowed sacralization of state sovereignty. His god is the collective power by which the Jews were delivered from the House of Servitude. This is a powerful and original reading that opens new areas of research and offers conclusive proof of Spinoza's contemporaneity.” –   Warren Montag, Brown Family Professor in Literature,