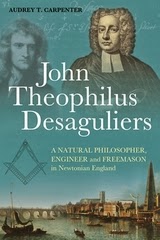 John Theophilus Desaguliers made his mark on the eighteenth century in several diverse ways. He was an assistant to Sir Isaac Newton and later elucidated the difficult concepts of Newtonian physics in private lectures. He was a member of the Royal Society, and was presented with the Society's highest honour, the Copley Medal, no less than three times. He was a pioneering engineer: the water supply of Edinburgh, the ventilation of the Houses of Parliament and the first Westminster Bridge all owed him a debt. In a different sphere, Desaguliers became the third Grand Master of the Grand Lodge of the Freemasons which was founded in 1717. He is remembered worldwide for his seminal influence during those early days of Freemasonry. He also wrote poetry and had an influential circle of patrons, including George I and Frederick, Prince of Wales (whom he initiated as a Mason at a specially convened lodge at Kew). This biography, based on original research, describes a charismatic character who was a major figure of his age.

Introduction - New Ideas in a Changing Society / 1. Early Life - From Forebears in La Rochelle to Education at Oxford / 2. Lectures in London and Beyond, Royal Recognition and Ecclesiastical Preferment / 3. Demonstrator and Fellow of the Royal Society / 4. Freemasonry - Desaguliers's Contribution to the Early Years of Grand Lodge / 5. Translations from French and Latin, and Troubles with Booksellers / 6. Fire, Water and Air - Desaguliers the Engineer / 7. Patronage - Desaguliers at the Service of the Duke of Chandos and His Great Estate at Cannons / 8. Desaguliers's Influential Work on Contemporary Science - The Publication of A Course of Experimental Philosophy and A Dissertation Concerning Electricity / 9. Poems, Plays and Pictures - a More Personal Perspective / 10. The House in Channel Row - Family, Lodgers, Health and Descendants / Appendices / Bibliography / Index.

“Carpenter's study of Desaguliers is a carefully researched and thoughtfully written antidote to the persistent neglect Desaguliers has suffered at the hands of historians. Desaguliers's personal history could have relegated him to a liminal status but instead he became a key interlocutor of the early Enlightenment and many of its most important English manifestations: Newtonian science, the Royal Society, Freemasonry, Whiggish politics, practical engineering and the most ethereal of mec
hanical apparatus” – Susan Mitchell Sommers, Professor of History, Saint Vincent College, US,

“If one man sums up the vibrancy and intellectual ferment of Newtonian London, it is the Huguenot exile and pioneering scientist, John Theophilus Desaguliers. Audrey Carpenter's compelling book assiduously reconstructs the many facets of this fascinating man's life, from his demonstrations of Newton's discoveries and his experiments with steam power and electricity to his pivotal role in the creation of new social activities such as Freemasonry. Carpenter vividly evokes through the figure of Desaguliers the coffee houses, taverns, masonic lodges and noble residences of Georgian London.” – Professor Andrew Prescott, King's College London,
Gepost door Boekennieuws VM op 07:38